Our current focus is to aggressively detect payload regressions and use PR reverts to restore payload health. This allows us to keep the organization as a whole moving forward toward a successful release.

We were highly susceptible to regressions in the quality of our payloads. This was due to a few factors:

Undetected (or detected but unresolved) regressions in payload health have a number of impacts:

With Job Aggregation we now have…

Instead of accepting payloads based on a “pass all tests once” gate, an aggregated job allows payloads to be accepted based on running all tests N times and ensures that, statistically, the observed pass percentage of each test is unlikely to have significantly regressed relative to our historical pass rate for each test, unless there is an actual regression present.

Pay special attention to the distinction from previously focus on job success to focus comparing test pass rates within a job to their historical mean. Another important thing to know is that, while these are primarily used for blocking nighly payload promotion, these aggregated jobs can optionally run (pre-merge).

How are they used?

Upon detection of a pass rate regression (As observed via attempted payload acceptance):

Using something called Fischer’s Exact Probability Test, it is possible to know how whether a payload being tested is better or worse than the payload(s) which produced a larger dataset. This is the mathy way of finding the statistical thresholds for how many failed testruns should be a failure.

This graph shows us that if the corpus (history) is passing a job,test tuple at 95%, then a payload that only passed 7/10 attempts has a 95% chance of having regressed us. 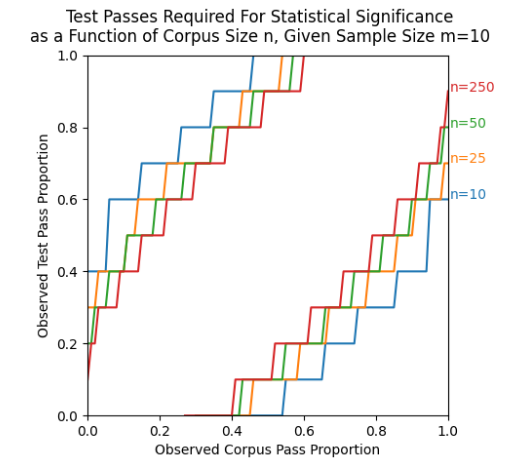 The lines in the lower right are the number of passes (or less) out of a sample size of 10, required to be 95% sure that the payload being tested is worse than the payload before. We can become more certain by running more iterations per payload or by reducing the threshold for passing.

The lines in the upper left are the number of passes (or more) required to be 95% sure that the payload being tested is better than the payload before. That could be used for faster ratcheting, but for the short term will not be used.

Our corpus/history (n) will be well over 250, so use that line. Our sample size is 10. Find the corpus pass percentage of the job,test tuple. Then go straight up and find the Y value. That value is the pass percent required to be 95% sure that the current payload is worse than the corpus (history).

Who is watching for payload regressions and opening reverts?

For now, the Technical Release Team watches payload results on the current release branch. They will open the revert PRs and engage the involved teams (any team that contributed a PR to the payload that regressed).

How will we be contacted if our PR is part of a regressed payload?

TRT will ping the relevant team slack aliases in #forum-release-oversight.

Who approves the revert for merge?

In order to ensure they are included in the conversation/resolution, we would like the team that delivered the original PR to /approve the reversion. However, if they are unavailable or unresponsive this may be escalated to the staff-engineering team to ensure we do not remain in a regressed state longer than necessary.

What happens if a giant change like a rebase with high business value and on the critical path of the release regresses the pass rate? Will it be reverted? Will we work on it until it passes good enough? What if the kubelet build hours or days later causes the regression?

Since we have a way to run the payload promotion checks before a PR merges, we encourage high risk changes to run the payload acceptance before they merge. If that payload acceptance test fails, then it is 95% likely (math, not gut) that the PR is reducing our reliability. That signal is enough to engage other teams if necessary, but since most repos other than openshift/kubernetes are owned by a single team and that team is the local expert, in the majority of cases the expert should be local.

If the PR isn’t pre-checked and we catch it during payload promotion, then even a high business value PR is subject to reversion. The unrevert PR is the place to talk about expected and observed impact to reliability versus the new feature. Both the revert and the unrevert are human processes, so there is room for discussion.

To avoid merging the revert, teams will need to be able to point to an open PR that contains a fix, and which has passed the payload acceptance checks.

The payload acceptance check aggregates the result of N runs into a pass/fail percentage and compares it against the baseline. We are going to start by only failing overall when there is a 95% confidence that the PR is worse than the baseline. The exact pass/fail counts vary depending on how bad the baseline is.

We are biased toward passing and only fail when we are 95% confident (mathematically, not gut feel) that the PR is worse than the baseline.

How can we possibly identify a fix before our PR is reverted? Can’t you just give us more time?

Given the timing of these events, it’s understandable that many teams aren’t going to bother investigating if it was their PR that caused the issue until there is definitive proof (in the form of a revert PR that passes the check). And even if they do immediately investigate and open a fix PR, they will be racing against the checks being run against the revert PRs. We will allow some small amount of flexibility here: if the team has a fix PR open, we’ll wait for the check to finish against that PR before merging the revert. But if the checks on the fix PR fail, the team will need to merge the revert and then land the unrevert along with their fix.

Remember, anytime our payloads are regressed, the entire org is being impacted. While there may be a small cost to a single team to land an un-revert, it avoids a greater cost to the org as a whole. We want to get back to green as quickly as possible and avoid a slippery slope of a team wanting to try “one more fix” before we revert. Teams can also optionally run the acceptance checks on their original PR before merging it, to reduce the risk that the PR will have to be reverted.

What if these new checks are wrong?

We will need to carefully study the outcomes of this process to ensure that we are getting value from it (finding actual regressions) and not causing unnecessarily churn (raising revert PRs due to false positives when nothing has actually regressed, or the regression actually happened in an earlier payload but went undetected at the time). TRT will track data on how many times this reversion process gets triggered and the outcomes of each incident and then do a retrospective after the 4.10 release.

What if cloud X has a systemic failure causing tests to fail?

That sort of failure will show up as, “I opened all the reverts and none of them pass”. The relative frequency of this sort of failure is difficult to predict in advance because our current signal lacks sufficient granularity, but it doesn’t appear to be the most common case so far.

What if you revert my feature PR after feature freeze?

We will make an exception to the feature freeze requirements to allow un-reverts(along w/ the necessary fix) to land post feature freeze, even though technically the unrevert is (re)merging a feature PR. Alternatively, consider moving your team to the no-feature-freeze process!

We often refer to these concepts with an imprecise vernacular, let’s try to codify a couple to make what follows easier to understand.